For livestock guardian dogs (LGD) strength lies in their numbers, because no individual dog is a match when facing wolves or bears. Team work and cohesion are vital if an efficient predator deterrence is to be achieved, therefore the unity and discipline of the pack are constantly monitored and maintained by both shepherd and dominant alpha. Each LGD has it's own strengths and weaknesses, skills and qualities, so it's important for the shepherd to make sound choices when introducing new dogs and puppies to the team. This is not as simple as one would think, as equilibrium and cohesion can easily be disturbed by bad decisions. Too many large, aggressive and dominant males all wanting to be the alpha is not going to bring harmony to the pack, and neither are too many females simultaneously coming into estrus. 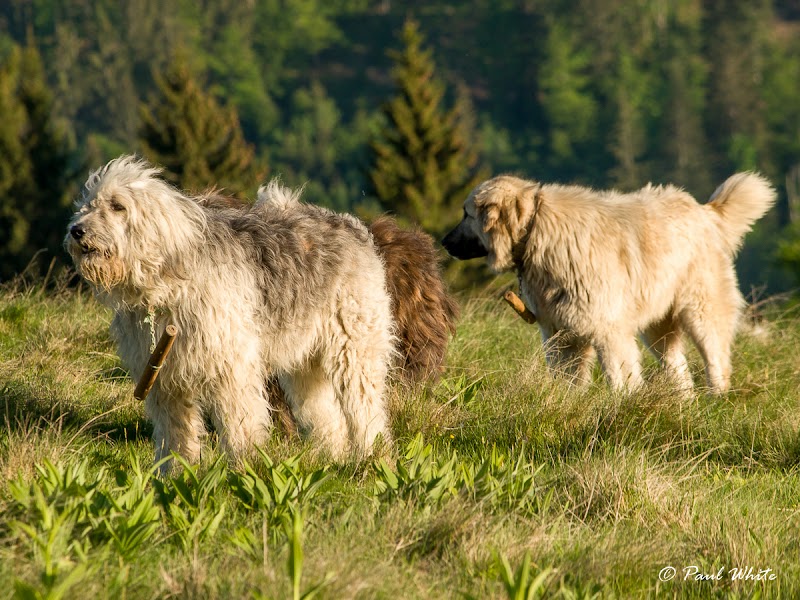 In Romania where open grazing is practised (without boundary fencing), flocks can move several kilometres in a single day to graze, often walking along trails surrounded by dense undergrowth to access meadows within the forest itself. Without the presence of protective barriers and a static defined territory, this poses additional challenges for both the shepherds and dogs when protecting livestock.

So what do I mean by positioning behaviour? A shepherd can teach a dog a lot about social etiquette and correct any bad habits as it develops and integrates into the pack, but there are certain instincts and behaviours that come naturally to an LGD that requires no teaching or verbal commands. Strategic positioning behaviour is just one of them. This is when a dog perceives a threat from predators and will take up position to counter that danger. One dog cannot see whats going on everywhere at once which is why team work is important, to cover as many bases as possible. What is remarkable is that each dog does this instinctively.

My first example is a lighthearted photo, but demonstrates thought and flexibility by these dogs perfectly. When I approach a new shepherd group, it takes time for the dogs to get to know me and my car. Anything that approaches the flock is perceived as a potential threat until proved otherwise. Dogs know that people in cars are not usually a problem in most circumstances, so my approach didn't cause any real excitement, but this fella wasn't taking any chances and laid across the track to block my path. As soon as the shepherd spoke to me in a relaxed state the LGD got up and rejoined his colleagues. 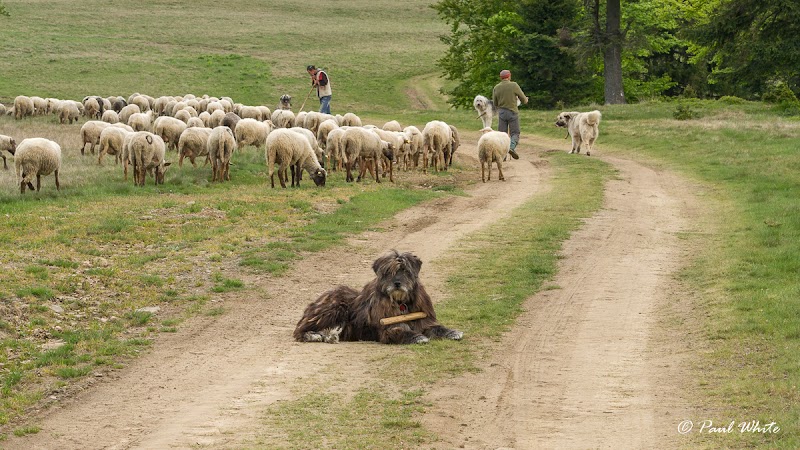 The photo examples that I have used in this article are taken from several shepherd groups that I meet and follow, so there are variations in the LGD breeds used (including crosses). That said qualities and traits are similar across the breeds.

So what positions can each LGD take up and do these interchange? Yes, they do change regularly depending on the circumstances and predatory threat. Some positions are riskier than others, so the confidence and experience of an individual dog will often dictate which position they move into when escorting and protecting the flock. Likewise if a dog is sick or injured, their role will also be absorbed by the pack. That said the most difficult position to fill quickly without too much of a negative affect is the alpha.

The alpha (I hesitate to say male because I know one pack that is led by a female) is key for maintaining discipline, leads from the front when confronting predators, is brave, bold, intelligent and can demonstrate high levels of aggression if and when required.

The following terms I use for positions and behaviours are my own reference descriptions which I'm sure vary from one observer to another.

Rearguard - as demonstrated in the photo directly below.

Front runners - those that lead from the front of the flock to check and counter predators before the sheep arrive.

Flankers - dogs that stay close to each side of the flock.

Sentries - Dogs that circle the flock whilst the other dogs engage with predators.

Patrols - These are the dogs that operate further away from the flock, seeking the high ground to observe for threats and engage predators that are in close proximity.

Close support - Dogs that stay within the flock to protect them.

Position and role changes at night when the sheep are static in the sheepfold. Most of the dogs will stay close to the enclosure whilst others patrol in the darkness. 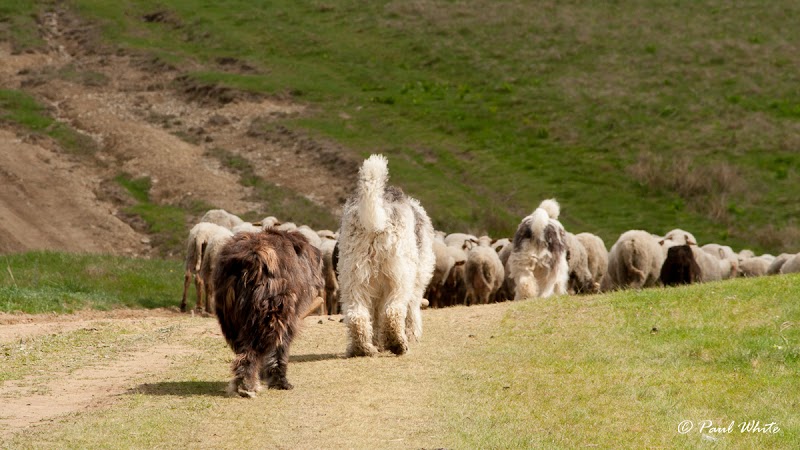 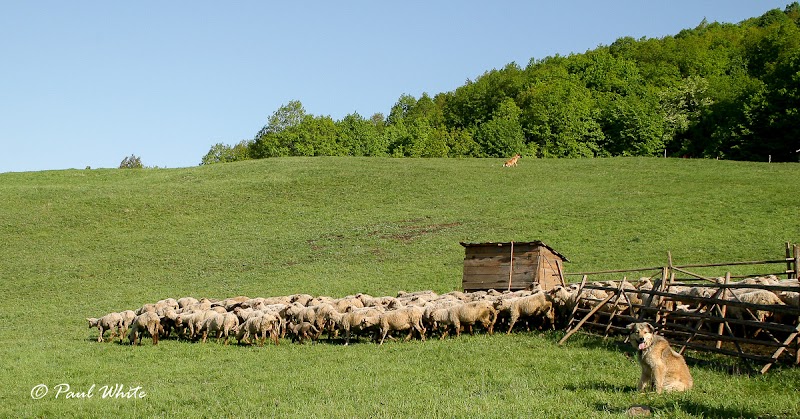 Each morning, usually before the sun rises, shepherds get up and milk their sheep before releasing them onto the meadow for grazing. In anticipation of the sheep leaving the relative safety of the sheepfold dogs take up their positions to protect the flock. As seen in the photo above the dog in the foreground is observing the meadow close to the exit of the sheepfold, staying close to the sheep and the shepherd. The dog in the distance is guarding the upper meadow and observing the treeline. If a wolf or bear was to break cover and rush at the flock the dog would bark and alert the others to assist. 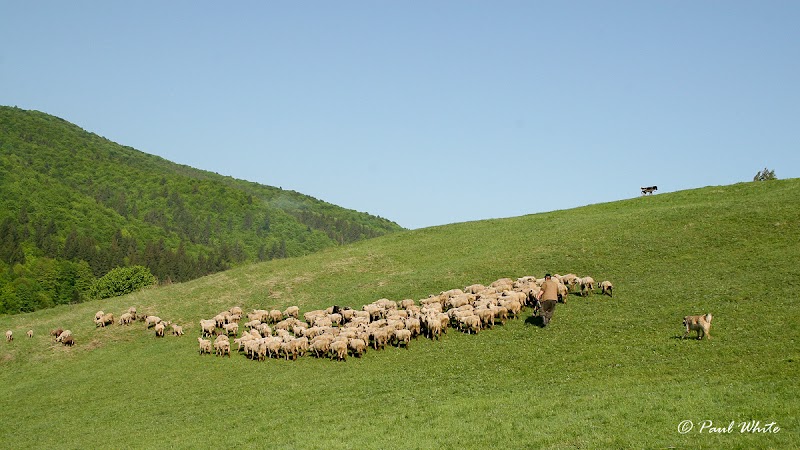 In forested valleys with meadows on undulating terrain it's impossible to see whats on the horizon, so the dog above has taken to the high ground to observe for any danger approaching from the other side of the hill.

Many shepherds tell me they can tell what species of predator is approaching by the way their dogs bark and respond to imminent danger. Livestock guardian dogs escalate their warnings to approaching predators with ever increasing excitement and aggression. If these warnings are ignored the dogs will then run at the predator, which is the final chance for bears, wolves, foxes or lynx to turn around and retreat. Otherwise they risk being physically attacked. The role of the LGD is to protect livestock with the minimum force necessary, not to pursue a retreating predator to kill it. 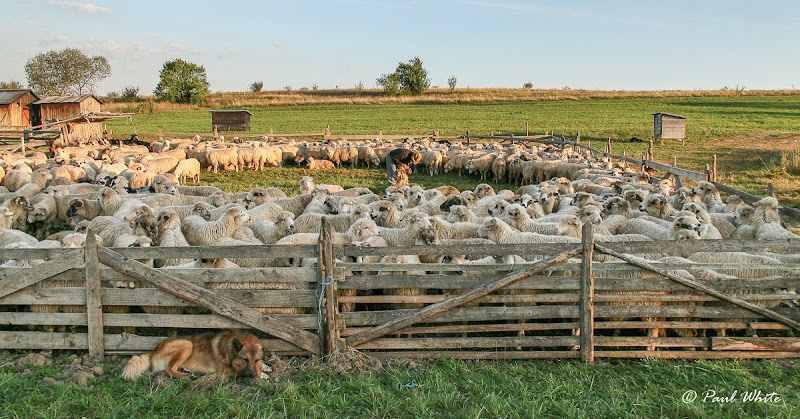 The sheepfold is made up of wooden fence sections tied together. This is a temporary structure moved by horse and cart when the shepherds seek fresh grazing. Sheep are gathered at night for their protection, for milking and tending their hooves which is what the shepherd is doing in the photo above. You can also see two wooden boxes immediately behind and to the right of the sheepfold. Shepherds sleep in these and can quickly vacate them to assist the dogs when engaging predators during the night.

Observers sometimes have the impression that livestock guardian dogs are lazy and sleep too much. This couldn't be further from the truth. They are highly active when they need to be, which is often during the night when predators are most active and the shepherds are sleeping, but then take every opportunity to rest and conserve energy when it's calm and quiet. That said they can explode into action from a deep sleep, which is why it's important to make some noise when approaching on foot.

When a shepherd decides to drive the flock along a forest trail, LGD front runners will check and clear the way ahead from obvious or hidden dangers, infiltrating the treeline as they make progress. This can be a dangerous time as the shape of the flock is forced into a long thin line giving predators more opportunities to pick off sheep. 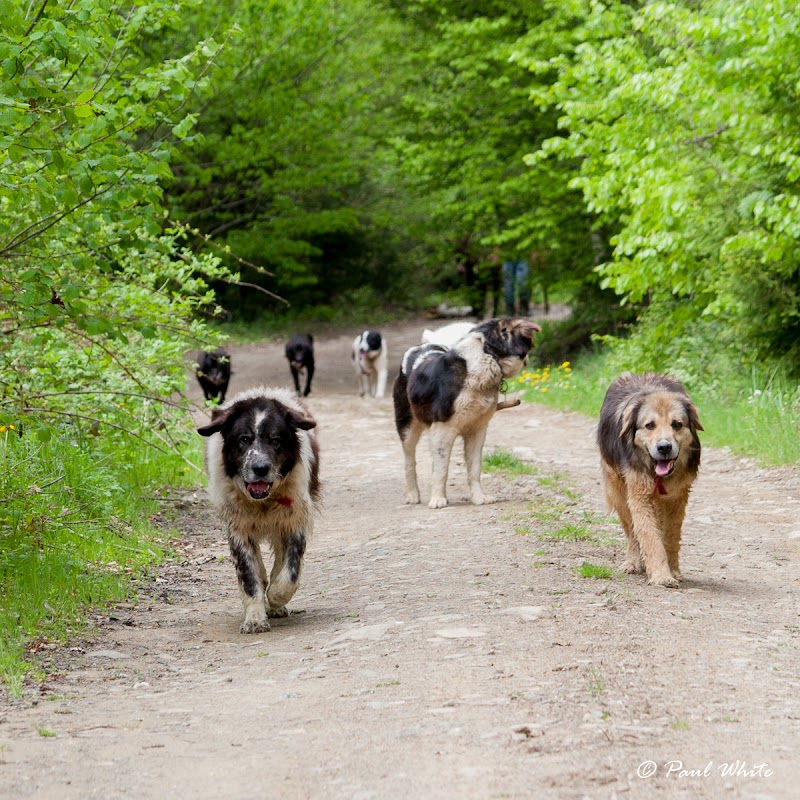 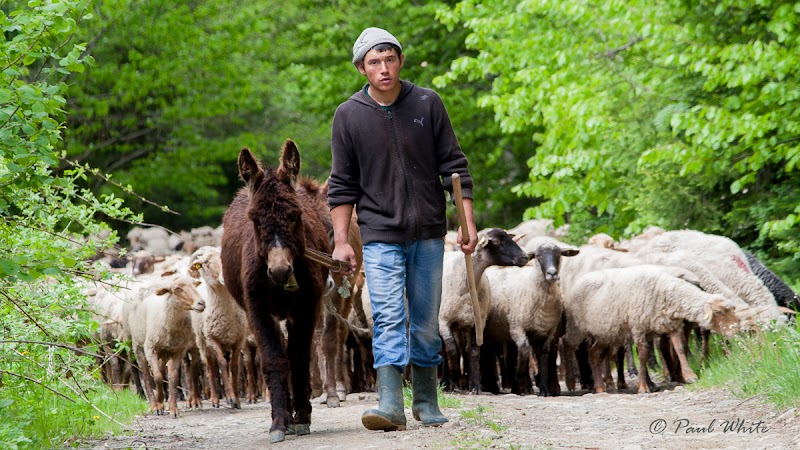 On open land where views across meadows are uninterrupted dogs have more time and opportunity to warn predators not to advance. This is not always possible on secluded forest trails where wolves and bears can appear in an instant with deadly consequences, so constant vigilance is important to enable the dogs to respond immediately.

Note: Wolves also use positioning tactics to try and outwit or outflank livestock guardian dogs in an attempt to divert their attention away from the sheep. One method used is to send in a single wolf towards the dogs to draw them away from the flock. As the dogs band together and rush at the wolf the remainder of the wolves run into the flock. This tactic can work with inexperienced dogs, but a well established pack with wiser and more experienced individuals are aware of these distraction tactics and will always leave dogs behind to guard the flock whilst the others engage.
Updated on April 30th, 2020.
‹
›
Home
View web version